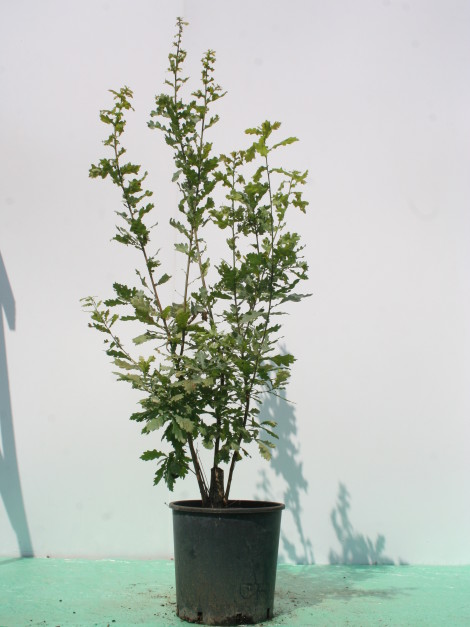 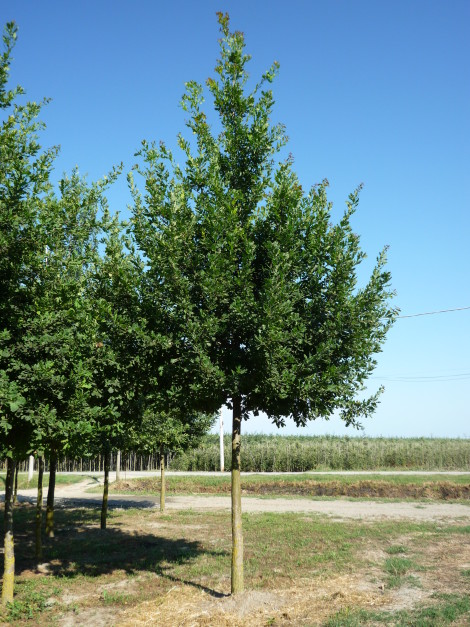 Botanical characteristics: It is a large and stately deciduous tree, mediumgrowing, long-living, it reaches 30 meters in height.
Its trunk is rather short, with sturdy branches and expanded foliage. It has a grey-brown bark fissured into small plates. Leaves are ovate to oblong, up to 15 cm long, dark green, with 4-5 rounded lobes on each side. Leaves are characterized by very short stalk (sessile) and leaf auricled base . In autumn the colour is yellow brown and remain dry on the plant for a long time.It is a monoecious plant with male flowers in catkins and yellow insignificant female flowers, separated but on the same plant.
The fruit is ovoid, insingle acorns or in bunches of 2-3, on long slender stalk

Agronomic and environmental characteristics: It is the most common oak in Europe, present in the peninsula particularly in northern and central Europe. Especially in flood plains and wetlands in the valleys with high water table in forests with fertile and deep soils, very wet but with no water stagnation, with preference for acidic soils. Formed along with hornbeam natural forests which covered the Po Valley, in the plant association called Quercus-Carpinetum. Is resistant to drought and pollution.

Use: It is an isolated plant or in groups in parks. It is interesting to use it in urban green spaces, including alleys or for renaturations of overgrown, abandoned areas, in plain and hill on fresh soils.