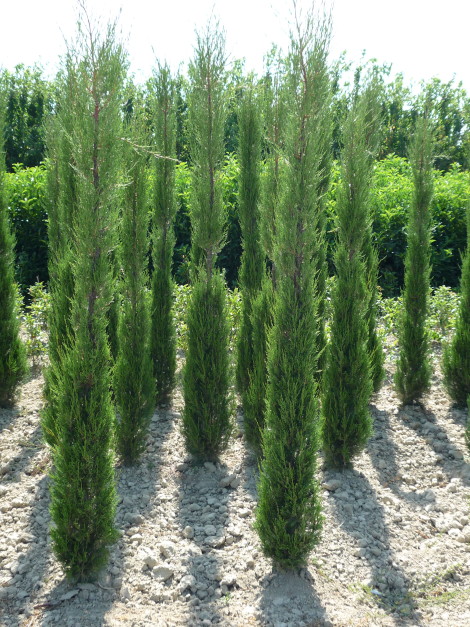 Botanical characteristics: It is an evergreen conifer with a narrow columnar shape, sometimes it is wider. The colour of leaves range from dark green to grey-green. They are very small, scale-like on little round-sectional branches. It is a monoecious plant, with separate male and female inflorescences on the same plant. Male ones release pollen in March whereas female ones produce round cones, about 2-3 cm long, that consist of 8-12 polygonal sharp scales. At first they are green and then grey-brown when they are ripe.

Agronomic and environmental characteristics: Originally it comes from the East, it was introduced in Italy later in ancient times. It is very common and popular, it is become a typical element of the Mediterranean landscape, especially in the hills of Tuscany and Umbria. It adapts to any well-drained soil, to poor and dry ones, to both clayish and calcareous ones as well. It has a good resistance to marine climate.

Use: It is used as single plant or in groups in parks and gardens, along tree-lined streets, as windbreak, for reforestations in Mediterranean areas. It is suitable for small spaces.