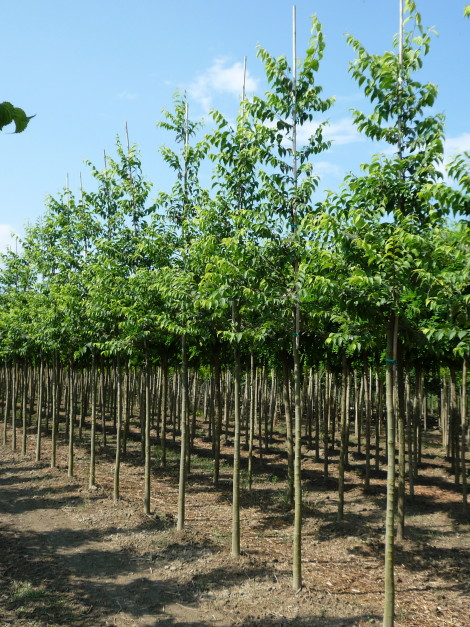 Botanical characteristics: It is a large deciduous tree with rounded medium-large crown. It has a smooth grey bark. Lanceolate-acuminate leaves are asymmetrical at the base, serrated, green-grey and rough on the upper side, tomentose below. Fruits are small edible drupes, about 1 cm in diameter, at first green, blackish when they are ripe.

Agronomic and environmental characteristics: It can be found throughout the Italian territory but it is also frequently cultivated. It can be found in calcareous soils and dry forests, up to 800 mt high. It prefers poor soils and has an high resistance to drought and urban pollution.

Use: It is cultivated in Europe as an ornamental plant, to be planted in shade, widely used for street trees. In the past it was placed in the courtyard of the country house for shade. To be used in gardens as a single plant in the middle of a meadow or in a courtyard. It can be used as a single plant in parks or in groups along avenues. It is used for afforestation of wastelands and hills.